Tom Clark used Inno-Therm®/Métisse® in his campervan conversion using both 50mm and 20mm in thickness. The insulation was installed in the cavities of the walls and on the roof of the van.

He was sent samples of the 20mm and 50mm to test and get an idea of how the materials behave. He also wanted to determine the thicknesses he would need in the different parts of the van. 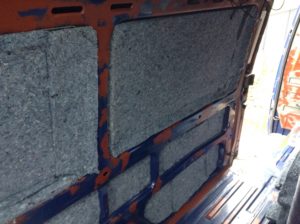 He then added a second layer to the side-walls of insulation (Low-E), an aluminium reflective thermoliner which also kept Inno-Therm®/Métisse® in place.

Tom then added a thin layer of ply fixed to the van body to hold it all in line that became the van interior. 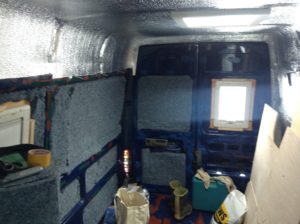 Inno-Therm®/Métisse® was easy to cut into the shapes with sharp scissors. It was nice to work with as it is a soft natural flexible material. It has made a big difference in the van already, against the metal bodywork. It has also provided a good acoustic insulation for the inside of the campervan.

During the current Covid 19 restrictions, we are able to continue to handle enquiries by phone and email. We are able to dispatch goods as courier services are still operating, providing your premises can accept deliveries. You must contact us to discuss delivery lead time.

All quotations are free and without obligation.

Any cookies that may not be particularly necessary for the website to function and is used specifically to collect user personal data via analytics, ads, other embedded contents are termed as non-necessary cookies. It is mandatory to procure user consent prior to running these cookies on your website.