On Sunday 17th April 2016, David Garlovsky was invited to give a talk at the Spring Fling of the Fountainbridge Canalside Initiative (FCI) in Edinburgh. Workshops on the day included: welding, mosaic making and much more. One mosaic was created spontaneously on the day to cover a damaged window of the community-use WikiHouse that was on site. 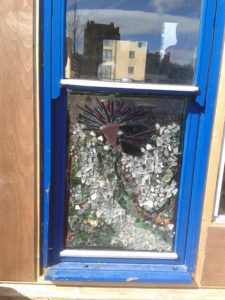 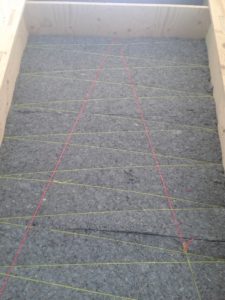 Teams of local volunteers and supporters of the project constructed the community WikiHouse in October 2015. Over a weekend, it was assembled using the WikiHouse system. WikiHouse is an international initiative enabling people to build their own housing with only basic tools and skills required. It uses sections of pre-cut wood, which slot together perfectly to create floors, walls and ceilings and is more akin to a jigsaw puzzle than a traditional building project.

The FCI WikiHouse will be used a community space for workshops, classes and meetings. FCI came together to create a vision to breathe new life into Fountainbridge, a canalside area with a rich industrial history near the centre of Edinburgh, and to play a part in the development of the former brewery site. The group is made up of local residents and organisations.

During the current Covid 19 restrictions, we are able to continue to handle enquiries by phone and email. We are able to dispatch goods as courier services are still operating, providing your premises can accept deliveries. You must contact us to discuss delivery lead time.

All quotations are free and without obligation.

Any cookies that may not be particularly necessary for the website to function and is used specifically to collect user personal data via analytics, ads, other embedded contents are termed as non-necessary cookies. It is mandatory to procure user consent prior to running these cookies on your website.